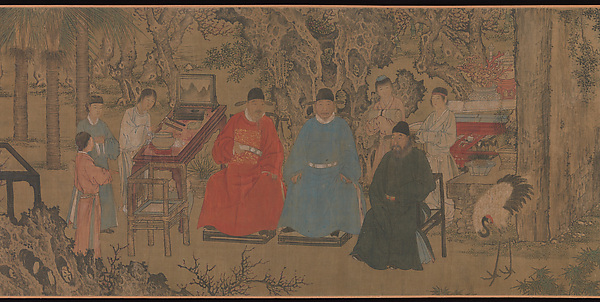 Waley, Arthur, Assistant in the British Museum. An Introduction to the Study of Chinese Painting. New York: Charles Scribner's Sons. 1923.

The National Palace Museum - [Taipei, Taiwan, Republic of China] - "The National Palace Museum houses a rich collection of precious treasures from 7,000 years of Chinese history, and has earned praise from all corners. The history of the collection itself dates back to the Northern Sung (10th century), and represents the accumulated treasures of the Imperial collection: all kinds of calligraphy, books and documents, bronzes, porcelains, jades, lacquer ware, carvings, and more. The museum's astoundingly varied collection of nearly 700,000 items shows the enduring brilliance of the history of Chinese civilization."

Shanghai Museum - "The Shanghai Museum, established in December 1952, is a large museum of ancient Chinese art, boasting a collection of 120,000 pieces of culture relics in twenty-one categories, including bronze, ceramics, calligraphy, painting, sculpture, furniture, jade and ivory carvings, oracle bones, seals, coins, minority arts, and bamboo, wood and lacquer wares etc. Its collection of bronze, ceramics, and painting and calligraghy are the most well-known in the world."

National Art Museum of China - Beijing - "Its permanent collection includes both ancient and contemporary Chinese artworks as well as notable Western artworks. Although the museum contains collection of imperial Chinese art, its main mission is to serve as a national level art museum dedicated to displaying, collecting and researching the modern and contemporary artistic works of China." - (Wikipedia)
Official Site: http://www.namoc.org

Yishu - Journal of Contemporary Chinese Art - "A leading journal in the coverage of Chinese contemporary art and culture. With each quarterly issue, you will find scholarly essays on topical matters, critical commentary of conferences, exhibitions and books in the Chinese art field. Yishu aims to provide an authoritative forum for dialogue and debate around the visual and literary forms being produced within an expanded understanding of Chinese Contemporary Art."

NUS Museum - [The National Univ. of Singapore] - "7000 years of Chinese culture and civilization."

Orientations - "Published in Hong Kong and distributed worldwide, Orientations has been delighting collectors and connoisseurs of Asian art for over twenty-five years. Every issue is an authoritative source of information on the many and varied aspects of the arts of East Asia, the Indian Subcontinent and Southeast Asia."

The Freer Gallery of Art and the Arthur M. Sackler Gallery - These are the two national museums of Asian art at the Smithsonian Institution, Washington, DC. - The Sackler houses the collections of Ancient, Asian, Islamic, and Later Indian art. Among its particular treasures are the world's finest collection of Chinese jades, Korean ceramics, and Chinese cave temple painting and sculpture; a significant collection of Japanese woodblock prints; one of America's most important collection of Chinese bronzes; Greek and Roman sculpture and vases, and ancient coins."

China Institute in America [New York] - "China Institute Gallery generally presents two major exhibitions annually, each focusing on a unique aspect of Chinese art. Gailery exhibitions have included a variety of media, forms and subjects from as early as 3000 BC through the present. The list of guest curators comprises many of the leading scholars in their fields and the exhibitions have been broadly commended for their originality, scholarship and high aesthetic quality. The Institute arranges tours to museums, private art collections and archeological sites here and overseas and offers courses, lectures and symposia conducted by noted historians and scholars of Chinese art."

The Asia Society - "A national nonprofit, nonpartisan educational organization, the Society provides a forum for building awareness of the more than thirty countries broadly defined as the Asia-Pacific region-the area from Japan to Iran, and from Central Asia to New Zealand, Australia and the Pacific Islands . . . . Founded in 1956 by John D. Rockefeller 3rd, the Society reaches audiences around the United States through its headquarters in New York and regional centers in California and Texas, and Washington, DC, and representative offices in Seattle and San Francisco. Asians from all walks of life also participate in the Society's work through the Society's Hong Kong and AustralAsia Centers, representative offices in Shanghai and Manila, an International Council, and programs in Asia."

Asia-art.net - "We present you with traditional and modern Asian art that captures the spirit, cultural complexity and charm of Asia."

An Exhibition: Celebrate the Silk Road - "Not a highway in the modern sense, the Silk Road was instead a loose network of trails connecting China, india, and the Mediterranean via the mountains and deserts of Central Asia. Traveled for millennia by merchants, monks, and adventurers, these routes and their scattered oasis settlements played a crucial role in both the dispsersal of goods and the spread and exchange of religious ideas and cultures across the continents." [Freer and Sackler Galleries, Washington, DC]

An Exhibition: China: Dawn of a Golden Age

An Exhibition: Iraq and China - Ceramics, Trade, and Innovation

An Exhibition: The Golden Age of Chinese Archaeology - Celebrated Discoveries from The People's Republic of China

An Exhibition: Treasures of the Chinese Scholar - [The University of Pennsylvania Musuem of Archaeology and Anthropology]

The International Dunhuang Project - [Sponsored by the Chiang Ching-Kuo Foundation and the Heritage Lottery Fund] - "This page gives access to information on over 26,000 manuscripts and printed documents from Central Asia in the British Library collection (it will expand to include manuscripts from other collections in the future). It also includes high quality colour images of manuscript fragments, with more images being added every week.

Arts of Asia - "Arts of Asia, founded in 1970, is the world's leading fine magazine of Asian art. Published six times a year, it has the largest circulation of any Asian art magazine and is distributed to 80 countries. It has the support of numerous museums, cul- tural organisations, universities and schools throughout the world, as well as the major dealers and collectors, and students of art."

Asian Arts - "The on-line journal for the study and exhibition of the arts of Asia."

Asian Arts - "The on-line journal for the study and exhibition of the arts of Asia."

Yishu - "Journal of Contemporary Chinese Art is a leading journal in the coverage of Chinese contemporary art and culture. With each quarterly issue, you will find scholarly essays on topical matters, critical commentary of conferences, exhibitions and books in the Chinese art field. Yishu aims to provide an authoritative forum for dialogue and debate around the visual and literary forms being produced within an expanded understanding of Chinese Contemporary Art."

S. Bernstein & Co. - "We are a specialist dealer in Chinese jade and oriental works of art." [Appraisals, Publications]